A Chat with Mallam S.U. Tsauri

Genetically modified (GM) crops have many potential advantages in terms of raising agricultural productivity and reducing the need for (environmentally harmful) pesticides. They might also pose hazards to human health, from toxicity and increased risk of allergies, for example. However, particularly in Europe, regulations designed to ensure adequate safety of GM technologies may go too far. Plant genetic engineering methods were developed over 30 years ago, and since then, genetically modified (GM) crops have become commercially available and widely adopted. In 2009, GM crops were being grown on 10 percent of the Earth’s arable land.

In these plants, one or more genes coding for desirable traits have been inserted. The genes may come from the same or another plant species, or from totally unrelated organisms. The traits targeted through genetic engineering are often the same as those pursued by conventional breeding. However, because genetic engineering allows for direct gene transfer across species boundaries, some traits that were previously difficult or impossible to breed can now be developed with relative ease.

So-called first-generation GM crops have improved traits. Herbicide-resistant soybeans and corn (maize), for example, can be “weeded” with herbicides that are more effective, less toxic, and cheaper than the alternatives. Cotton and corn have been modified to incorporate Bacillus thuringiensis (Bt) genes, producing proteins that are toxic only to larval pests. Crops can also be modified to ward off plant viruses or fungi. Even though the seed is more expensive, these GM crops lower the costs of production by reducing inputs of machinery, fuel, and chemical pesticides. In addition, due to more effective pest control, crop yields are often higher.

Where Bt crops have been grown in developing countries, the technology appears to often generate employment, because more workers are needed to harvest the significantly higher yields. One study in India suggests that Bt cotton produces 82 percent higher incomes for small-farm households compared with conventional cotton—a remarkable gain in overall economic welfare.

Recent research shows that direct and indirect effects of Bt cotton increase aggregate welfare by over $2 billion per year in India alone; a significant share of these gains go to rural households living below the poverty line. The annual gains of Bt cotton in China are also estimated in a range of $1 billion. Other developing countries where farmers use Bt cotton include Pakistan, South Africa, Burkina Faso, Mexico, and Argentina.

GM soybeans and corn, which are widely grown in North and South America as well as South Africa and a few other countries, also produce large aggregate welfare gains, currently estimated at $5 billion per year at the global level. Huge benefits are also projected for future GM crops that are more tolerant to drought or more efficient in nutrient use.

In terms of the distribution of benefits, interesting differences can be observed between developed and developing countries. In developed countries, where GM technologies are mostly patented, large profits accrue to biotech and seed companies. In contrast, intellectual property protection is relatively weak in most developing countries, so that GM seed prices are lower and farmers’ benefit shares higher. For example, soybean farmers in Argentina or cotton farmers in China and India capture over 70 percent of the overall GM technology benefits. Consumers benefit, too, because new technologies tend to lower the price of food and other agricultural products.

Second-generation GM crops involve enhanced quality traits, such as higher nutrient content. “Golden Rice,” one of the very first GM crops, is biofortified to address vitamin A deficiency, a common condition in developing countries that leads to blindness and entails higher rates of child mortality and infectious diseases. Other biofortification projects include corn, sorghum, cassava, and banana plants, with enhanced minerals and vitamins. Widespread production and consumption of biofortified staple crops could improve health outcomes and provide economic benefits in a very cost-effective way, especially in rural areas of developing countries. A recent simulation shows that Golden Rice could reduce health problems associated with vitamin A deficiency by up to 60 percent in rice-eating populations.

Despite all those real and potential advantages, GM crops have aroused significant opposition, particularly in Europe. The major concerns relate to potential environmental and health risks, such as allergenicity of transgenes or loss of biodiversity. But there are also fears about adverse social implications—for instance, that GM technology could undermine traditional knowledge systems in developing countries—and the monopolization of seed markets and exploitation of small farmers.

Unexpected risks have not materialized so far, and those risks that do exist seem to be manageable. There is even evidence that GM technology can contribute to the preservation of agrobiodiversity, because the new traits can be inserted into local heirloom varieties. Nevertheless, concerns have led to complex and costly biosafety, food safety, and labelling regulations.

Governments have responsibility for ensuring that foods are safe for consumption and that new agricultural inputs do not damage the environment or harm agricultural production. Most countries require GM products be approved before they may be grown, consumed, or imported. Because approval processes are not internationally harmonized, they have become a major barrier to the spread of GM crops and technologies. For example, the European Union has not yet approved some of the GM corn technologies used in the United States and Argentina, which obstructs trade not only in technologies but also in commodity and food markets.

Often, the regulators are extremely cautious and require extended regulatory trials over many years. The arduous testing comes at a cost: one estimate puts private compliance costs for approval of a new Bt corn technology in just one country at $6 million to $15 million. Beyond the direct regulatory costs are the indirect costs of forgone benefits—preventing the use of safe products. Such high regulatory costs slow down overall innovation rates. They also impede the commercialization of GM technologies in minor crops and small countries, where markets are not large enough to justify the fixed-cost investments. Expensive regulations discourage small firms, thereby contributing to the further concentration of the agricultural biotech industry.

The regulatory complexity appears to be the outcome of the politicized debate and lobbying success of antibiotech interest groups, especially in Europe. Even though genetic engineering does not entail unique risks, GM crops are subjected to a much higher degree of scrutiny than conventionally bred crops. Some reform of GM regulations will be necessary, and economists have an important role in quantifying the costs and benefits.

A “safety rule” approach could be useful here. It combines a probabilistic risk assessment model with a safety rule decision mechanism and can be employed for cost-benefit and risk-benefit analyses. Its transparent criteria would bring science and objectivity to decision-making processes that are often influenced by political economy considerations and a precautionary approach.

Overregulation has become a real threat to the development and use of GM crops. Zero regulation is not desirable, either, but the trade-offs associated with regulation—particularly the forgone benefits for developing countries—should be considered. In the public arena, the risks of GM crops seem to be overrated, while the benefits are underrated.

A Brief on NAERLS Adopted Village and School Outreach 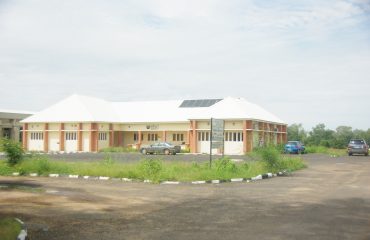