A Brief on NAERLS Adopted Village and School Outreach

The Adopted Village concept, which originated from India, was one of the innovations introduced into the Nigerian agricultural research by National Agricultural Research Project (NARP) in 1997. It was initiated in Nigeria to facilitate the trial of new research findings by scientists under the farmers’ environmental conditions. The advantage was to involve the farmers in farm technology trials either as observers, in the case of researcher-managed trials, or executors in the case of farmer-managed trials. The assumption was that involvement of farmers will, in turn, speed up the rate of adoption of agricultural technologies to other farmers since the trials also served as demonstration plot.
The government thus mandated all National Agricultural Research Institutes (NARIs) to establish adopted villages and schools within 20km distance from their respective head offices. Such villages and schools were to serve as laboratories for showcasing agricultural technologies developed by the research institutes. In this sense in 2009, the Agricultural Research Council of Nigeria (ARCN) reinvented the adopted villages as Agricultural Research Outreach Centres (AROCs). To this effect, the National Agricultural Extension and Research Liaison Services (NAERLS) developed and established 2 adopted villages and schools for its headquarters and 1 adopted village and school each for its then 5 zonal offices, thus having a total of 7 villages and 2 schoolsnote that as at this period the 6th zonal office of the Institute had not been established. These were Sakadadi village and Nassarawan-Buhari in Sabon-Gari and Giwa LGAs (respectively) of Kaduna State (for the headquarter in Zaria); Tudun-Iya village, Funtua LGA of Katsina State (NW); Okolo village, Ibarapa East LGA of Oyo State (SW); Nwogi village, Katcha LGA of Niger State (NC); Shuwari village, Jere LGA of Borno State (NE); and Lodu-Imenyi village, Bende LGA of Abia State (SE).

In 2011 , the West African Agricultural Productivity Programme (WAAPP Nigeria) was established as an arm of ARCN to further promote and ensure access to demand-driven generation and dissemination of agricultural technologies by farmers. WAAP commenced funding of adopted villages and schools activities by June 2012, which further enhanced the adoption of more villages and schools. By March 2016, the number of adopted villages operated by NAERLS were above 45 and located around the head office and its 6 zonal offices across Nigeria.
The vision of NAERLS adopted village is: to provide demand-driven extension and sector-led services and contribute to realizing the national agricultural sector objectives. The mission is: to increase farmers’ access to information, knowledge and technology through effective, efficient, sustainable and demand-driven extension. The principles of the NAERLS adopted village operation are: to empower the farmer in agricultural technology process and build demand for both research and agricultural advisory services; target agricultural services to farmers and mainstream gender issues; to intensify productivity and specialization participatory processes in planning, implementation, monitoring and evaluation, as well as managing natural resource productivity; and to increase institutional efficiency through better linkages between research, advisors and farmers.
The general objective is to improve the economic status and livelihood of the selected villages in the 6 agro-ecological zones of the country. The specific objectives are to:
1. Enhance food security and market competitiveness
2. Empower resource-poor farmers
3. Enhance job and self-employment opportunities for youths and women
4. Augment sustainable natural resource management efforts of the communities

The core of this summary is the question: What are the activities of the Adopted Village unit of the Institute towards achieving the above objectives? These activities are many and they include: adoption of new villages and schools; facilitating the formation and registration of farmers’ groups (male, female and youth); facilitating enterprise planning (crop, livestock, and value addition; facilitating farmers’ linkages with banks and insurance companies; facilitating group situation analysis; and facilitating linkages with input agencies. The unit also link farmers with livestock ambulatory services, as well as produce markets; they organize and conduct joint field days, excursion visits and farmers exchange visits. They also produce and air broadcast programmes, as well as extension publications to advance the frontiers of agricultural information. With such methodology and operational strategy, the NAERLS Adopted Village concept has helped, over the years, in accelerating agricultural technology transfer and utilization within the agricultural research and development system in Nigeria.

NAERLS Management Team Interacts with the Minister of State for Agriculture 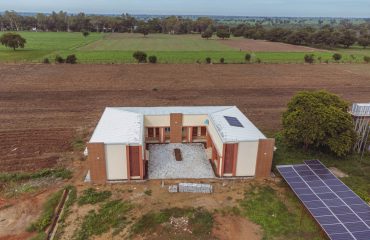 An award culture for good performance